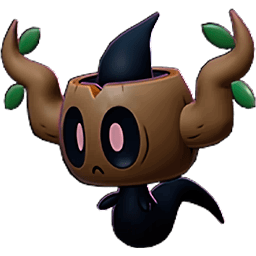 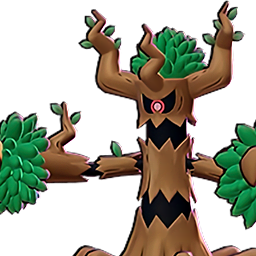 An offensive trickster that steals HP and manipulates the damage dealt and taken by its opponents.

Becomes a boosted attack with every third attack, dealing increased damage to opposing Pokémon and restoring the user's HP when it hits.

Shoots sinister flames in the designated direction, dealing damage to any opposing Pokémon hit and leaving them burned for a short time.

Has the user jab in the designated direction, dealing damage to opposing Pokémon and decreasing their movement speed for a short time when it hits.

Expends HP to curse an area of the map that damages and slows opponents. The curse grows when dealing or absorbing damage, then explodes when released. At maximum power, resets the cooldowns of your other moves.

Has the user create a cursed zone in exchange for some of its HP, dealing damage over time to opposing Pokémon in the area of effect and decreasing their movement speed. The lower the user's HP is, the greater the decrease in movement speed. While using this move, the user builds up curse power every time it deals or receives damage. Releasing this built-up power will deal additional damage to opposing Pokémon in the area of effect. If the curse power is at maximum when it's released, the cooldowns of Branch Poke, Horn Leech, and Pain Split are reset.
Upgrade: Increases this move's area of effect.

Charges forward to steal HP from opponents and displace them. Deals damage again at the end of the charge, and boosts your next three basic attacks. These boosted attacks reduce the cooldown of this move.

Links your health to an opponent and increases your movement speed. Damage taken is reflected at the opponent proportional to its missing HP. Heals you when you have less %HP than your opponent and deals DOT. The link breaks when too far apart.

Creates a cursed forest, damaging, displacing and slowing opponents. Shields you and increases healing effects on you for each opponent hit. Affected opponents take more damage from your team's basic attacks.

Creates a cursed forest, dealing damage to opposing Pokémon in the area of effect, throwing them, and decreasing their movement speed for a short time. For a short time afterward, the basic attacks of all allied Pokémon deal increased damage to opposing that were hit by this Unite Move. The user is also granted a shield when this Unite Move hits an opposing Pokémon, with the shield effect becoming stronger the more opposing Pokémon are hit. While the user is shielded, HP recovery effects applied to the user are strengthened.