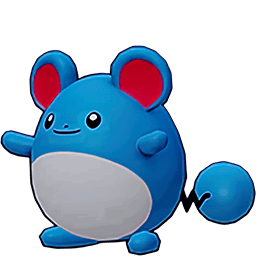 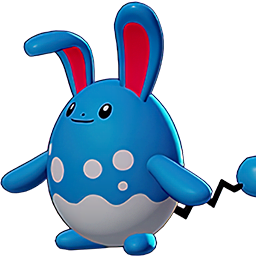 Azumarill is a Water and Fairy-type Pokémon introduced in Generation 2 in the Johto region. Azumarill evolves from Marill and takes on the role of a Melee All-Rounder in Pokémon UNITE.

A great defender for some even GREATER map control!
AzumarillFan101

Every third attack deals increased damage in an Area.

Becomes a boosted attack with every third attack, dealing increased damage to opposing Pokémon within a cone area of effect in front of the user.

Critical-Hits are guaranteed against isolated opponents. However, hitting more than one opponent will never crit. This applies to every one of Azumarill's attacks and moves.

Has the user charge forward, dealing damage to any opposing Pokémon it hits and leaving them unable to act for a short time.

Has the user spray bubbles in a cone, dealing damaging to opposing Pokémon in the area of effect and decreasing their movement speed for a short time. The user can move around while using the move.

Whilpools surround you, healing you when they damage opponents.

Hastens your next three basic attacks. At range, you heal increased True Dmg and steal HP.

Increases the speed and area of effect of the user’s next three basic attacks. If these attacks hit from a distance, they also deal increased damage, restore the user’s HP, and can ignore the Defense stat and shield effects of opposing Pokémon they hit.
Upgrade: After the user activates this move, its next three basic attacks will also reduce the cooldown of all of its moves when they hit an opposing Pokémon from a distance.

Move faster to catch and lunge at an opponent with your next attack, stunning it.

Swift. Next attack: Lunge and Stun.

Increases the user’s movement speed for a short time and changes the user’s next basic attack. When the user performs its next basic attack, it lunges at one opposing Pokémon in range and delivers repeated blows, dealing damage to that Pokémon and leaving it unable to act for a short time.
Upgrade: Further increases the user's movement speed when this move is used, and also reduces this move's cooldown.

Shoots water that bounces between opponents (up to three times), slowing them. You can roll-dash during this move.

Upgrade: Bounces between up to five targets.

Damage. Slow. AOE. Bounces between up to three targets.

Azumarill trades some of its HP to increase its Attack, then charges at an opponent, displacing anyone in the way.

Has the user pound its belly three times, granting it a shield. With each pound, the user loses HP in exchange for increased Attack. The user can move while pounding its belly. Afterward, the user targets an opposing Pokémon then charges at that Pokémon, dealing damage to and throwing all opposing Pokémon it hits while charging.