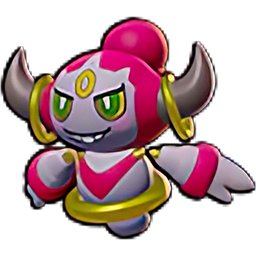 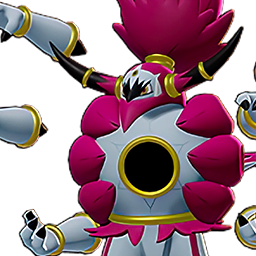 Hoopa is a Psychic and Ghost-type Pokémon that has the unique ability to unbind itself, becoming Unbound and turning from Ghost-type to Dark-type temporarily. Hoopa's national Pokédex number is #720 and was introduced in the Kalos region. In Pokémon UNITE, Hoopa holds the role of Ranged Supporter and has abilities to mess with its opponents.

Want the ultimate the guide to playing Hoopa? Here it is.
CharizardLeader2593662

A mixed attacker that can be used by any offensive move you choose.
BaryTheXinophane

Teleport a berry or Aeos energy right in front of you.

Deal AOE damage and stun opponents in the area.

Deals damage to opposing Pokémon in the designated area of effect, leaving them unable to act for a short time.

Deals damage to a Pokémon. After hitting, causes a delayed explosion that deals AOE damage and slows nearby opponents.

Upgrade: Become Invincible for a short time when used.

Hoopa creates a ring under itself and warps to a designated Pokémon's location, dealing damage to nearby opposing Pokémon at that location and shoving them. Hoopa the nshoots two sinister flames that deal damage to opposing Pokémon they hit and decrease their movement speed for a short time.

When using this move, if there is a nearby ally Pokémon that is linked by Trick, that ally can also warp to the initial ring's location. The ally Pokémon that warps in this way will recover some HP.
Upgrade: Makes the user invincible for a short time when this move is used.

Shoot a blob forward dealing damage to all opposing Pokémon hit, slowing them and decreasing their Sp. Def. If hitting with a boosted attack or another move shortly after, deal extra damage and stun the opposing Pokémon for a short time.

Upgrade: Blob explodes before disappearing, causing an AOE hit to nearby opposing Pokémon.

Pokémon linked by Trick, this move will also unleash a shadowy blob at the same target from that ally's location.
Upgrade: The shadowy blob will now explode before it disappears. Opposing Pokémon hit by the explosion are affected as if they were hit by the shadowy blob itself.

Create rings that deal AOE damage. After a short time, all ally Pokémon in the ring will teleport to base and have increased movement speed for a short time. Ally Pokémon can also use the ring to teleport back to the initial spot. If used on an opposing goal zone in the top or bottom lanes, the teleport will instead go to the opposite side's goal zone.

Hoopa creates a large ring at the designated location, dealing damage to opposing Pokémon in the area of effect. After a set amount of time, Hoopa and any ally Pokémon in the area of effect will return to their base, and their movement speed will be increased for a short time. Ally Pokémon that return to their base in this manner must wait a short time before the HP recovery from being in their base triggers. These ally Pokémon can also warp back to where the large ring was created.

If a path's forward goal zone is destroyed, the middle goal zone on the same path will take its place. This move cannot be used on base goal zones.
Upgrade: Also increases the movement speed of ally Pokémon near the ring when they are heading toward it.

Upgrade: Heals the linked Pokémon when the ring deals damage.

Hoopa creates a link between itself and an ally Pokémon using a ring, increasing both of their movement speeds and granting them each a shield for a short time.

When Hoopa uses Shadow Ball or performs a basic attack, the ring on the linked Pokémon also unleashes the same move or attack.

Hoopa can also use this move on itself, increasing Hoopa's movement speed and granting itself a shield for a short time. Additionally, it increases the damage dealt by Shadow Ball.
Upgrade: Also restores the linked ally Pokémon's HP when it deals damage to opposing Pokémon.

Become Hoopa Unbound, increasing max HP and a ring that all ally Pokémon can teleport to once. Replaces abilities with Hyperspace Fury and Psybeam. Cannot score while in this form.

Transforms the user into Hoopa Unbound for a short time, increasing the user's max HP and creating a ring at the designated location. Each ally Pokémon can warp to the ring's location once only.

As Hoopa Unbound, the user's moves change to Hyperspace Fury and Psybeam.

As Hoopa Unbound, the user cannot score goals or activate its Ability.

Has the user unleash a barrage of attacks in the designated area with its many arms, dealing damage to opposing Pokémon in the area of effect and leaving them unable to act for a short time.

Deal AOE damage. You are immune to hindrances while using this move.

Has the user fire a peculiar ray in front of itself in a horizontal sweeping motion, dealing damage to opposing Pokémon it hits. The user becomes immune to hindrances while using this move.