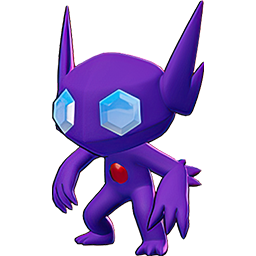 A trickster that hides in the shadows and manipulates Aeos energy.

Upon entering stealth, or for every third attack, deals increased damage and Slow. If in stealth, also inflicts Fear.

When out of sight of opponents, enter stealth. Remain in stealth briefly after seeing opponents. Stealth ends upon attacking, or when in visible range for too long.

Stealth (out of combat) (Invisible, Swift).

Dashes forward, slowing and stealing Aeos Energy from an opponent. If the opponent has no Aeos Energy, it gets stunned.

Has the user dash in the designated direction, dealing damage to any opposing Pokemon it hits and decreasing their movement speed for a short time. If this move hits Pokemon from the opposing team, it steals a small amount of their Aeos energy. If those Pokemon do not have any Aeos energy, they will be left unable to act for a short time.

Slows opponents in a cone, more so from behind.

Damage. Slow. More effective from behind.

Causes opponents to drop Aeos Energy. The first attack stuns opponents. The second one displaces them.

Enter stealth with additional move speed. Upon exiting stealth by attacking or lingering, can be reactivated if unhindered.

Stealth. Swift. Can reactivate if unhindered.

For a short time, increases the user's movement speed and has it enter stealth. While the user is in stealth, its first boosted basic attack deals additional damage. While this move is active, if the user exits stealth and a hindrance has not left it unable to act, it will be able to enter stealth again.
Upgrade: Increases the duration of this move's effects. While this move is active and the user is in stealth, it will also gradually recover HP.

Throw traps disguised as Aeos Energy to reveal sections of the map. Traps cause damage over time and slow opponents on contact.

Fires a beam that damages and confuses opponents.

Has the user fire a sinister ray in the designated direction, dealing damage to opposing Pokemon it hits. If this move hits Pokemon from the opposing team, it also leaves them confused. While confused, Pokemon continuously attack nearby Pokemon with basic attacks. Confused Pokemon will target nearby Pokemon in the following order of priority: first, their ally Pokemon; then, wild Pokemon; last, Pokemon on the user's team.
Upgrade: Also increases the movement speed and basic attack speed of Pokemon from the opposing team while this move has left them confused.

AOE damage. Face to face: Stun and return opponents to their base. From behind: Slow.

Has the user shoot light from both of its eyes, dealing damage to opposing Pokemon in an area of effect in front of itself. Pokemon from the opposing team hit by this move who are facing the user freeze in place and start involuntarily preparing to return to base. If they take damage before returning to base, they remain where they are and are left unable to act for a short time. Opposing Pokemon hit by this move who are not facing the user have their movement speed decreased for a short time.