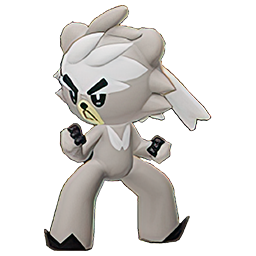 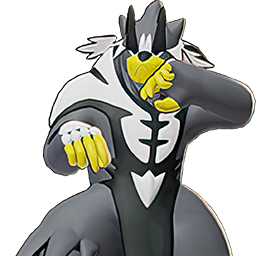 An attacker that must choose between a stronger, grounded technique or a light and agile one.

Kubfu: Reduces the duration of hindrance effects inflicted on the Pokemon.
Urshifu: When the Pokemon deals damage to an opposing Pokemon with a shield effect, it pierces part of the shield and deals damage.

Punches an opponent, dealing more damage the longer it is charged up. While charging up, take less damage.

Damage. Increased defenses while charging up.

Charges power before punching in the designated direction, dealing damage to opposing Pokemon. The longer power is charged, the more damage this move deals. The user receives reduced damage while charging.

Charges forward and stuns and opponent.

Has the user charge in the designated direction, dealing damage to opposing Pokemon it hits and leaving them unable to act for a short time.

Single Strike Style only: Damage an area and slow opponents. Becomes Spellproof with increased defenses while charging. At full charge, the hit crits and displaces opponents. The next basic attack is boosted.
Cooldown is reduced if the move is not fully charged.
*This move locks you into Throat Chop and Ebon Fist as your upgrade path.

Upgrade: Increased defenses while charging. Stuns opponents at the epicenter.

Single Strike Style only: Charges power before striking in the designated direction with a fierce blow. The user's next basic attack after hitting an opposing Pokemon with this move becomes a boosted attack. While the user is charging, its movement speed is decreased, but it receives reduced damage and becomes immune to hindrances. If the user charges power for a set amount of time or longer before striking, it deals damage to opposing Pokemon in an area of effect. The lower the opposing Pokémon's remaining HP is, the more damage is dealt. Opposing Pokemon in the center of the area of effect receive a critical hit and are shoved. If the user does not charge power for that set amount of time, it deals damage to opposing Pokémon in an area of effect, decreasing their movement speed, and this move's cooldown is reduced.
Upgrade: Further reduces the damage the user receives while charging. Also, when the user strikes after charging power, opposing Pokemon in the center of the area of effect are also left unable to act.

Rapid Strike Style only: Can be used three times, dealing damage after a dash. The final hit always crits and displaces opponents. The following Boosted Attack steals HP.
*This move locks you into Liquidation and Flowing Fists as your upgrade path.

Rapid Strike Style only: Has the user dash in the designated direction and strike with a flowing motion, dealing damage to opposing Pokemon it hits. This move can be used an additional two times, and the third time it is used, any hits are always critical hits, and it throws opposing Pokemon. The user's next basic attack after using this move becomes a boosted attack, and if the boosted attack hits, it restores the user's HP.
Upgrade: Also, while using this move, the user receives reduced damage.

Single Strike Style only: Dashes and Stuns opponents along the way. The next basic attack gets boosted.

Single Strike Style only: Has the user dash in the designated direction, dealing damage to opposing Pokemon it hits and leaving them unable to act. The user's next basic attack after using this move becomes a boosted attack.
Upgrade: Also reduces this move's cooldown when Wicked Blow hits.

Rapid Strike Style only: Damages the surrounding area, weakening opponents and gaining a shield for each opponent hit.

Single Strike Style: Dashes to an opponent and shoves it backwards. Then, can displace that opponent again in a chosen direction or, given no direction, simply shove it again and stun it. This Unite Move resets Wicked Blow.
Rapid Strike Style: Displaces nearby opponents in an area and gains Swift. This Unite Move reduces all other cooldowns. While activated, dealing damage three times adds a stack of Flowing Fists, up to 10. On second activation, throws five punches at an opponent, plus one punch per stack, displacing it backwards. Becomes Spellproof with increased defenses while expending stacks, and ends the Unite Move by once again displacing nearby opponents.