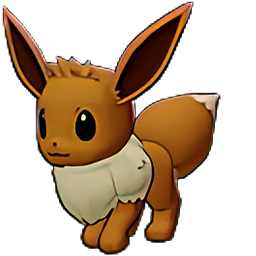 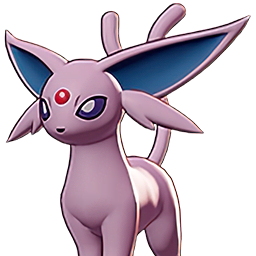 All evolutions: Removes hindrances and makes you spellproof. When evolved to Espeon (Magic Bounce): Deals damage to opponent that attempted to inflict the hindrance and slows them.

Shoots star-shaped rays at opposing Pokémon, dealing damage to them.

Has the user growl at a designated opposing Pokémon, dealing damage and decreasing its movement speed for a short time.

Upgrade: Increases the speed at which the projectiles travel.

Unleashes up to five stored blasts of psychic power at random opponents and increases movement speed after the move is used.

Upgrade: Increased damage and stuns other opponents if it first hits stunned opponents.

Locks onto an opponent then deals damage in their area. The less the opponent's HP, the more damage is dealt. Other moves damaging the locked-on opponent will reduce cooldown of Future Sight. If the opponent is knocked out before the area-of-effect damage is dealt, a powered-up use of Psyshock or Stored Power becomes available.

Has the user lock on to an opposing Pokémon, then deal damage a few seconds later to opposing Pokémon in an area of effect centered on the locked-down Pokémon. More damage is dealt the lower the locked-on Pokémon's remaining HP is. While the user is locked on to an opposing Pokémon, its other moves will target that Pokémon whenever possible. Each time one of these moves deals damage, Future Sight's cooldown is reduced. If the locked-on Pokémon is on the opposing team and is knocked out before the area-of-effect damage is dealt, a single powered-up use of Psyshock or Stored Power becomes available for a short time. When Psyshock is powered up, it hurls stronger psychic projectiles at a designated location that also cause an explosion, dealing damage to opposing Pokémon in the area of effect. When Stored Power is powered up, it unleashes an increased number of psychic power blasts and restores the users's HP when the blast hit.
Upgrade: The user deals increased damage to the opposing Pokémon that Espeon's Future Sight is locked on to.

Suspends opponents into the air then damages and displaces them.